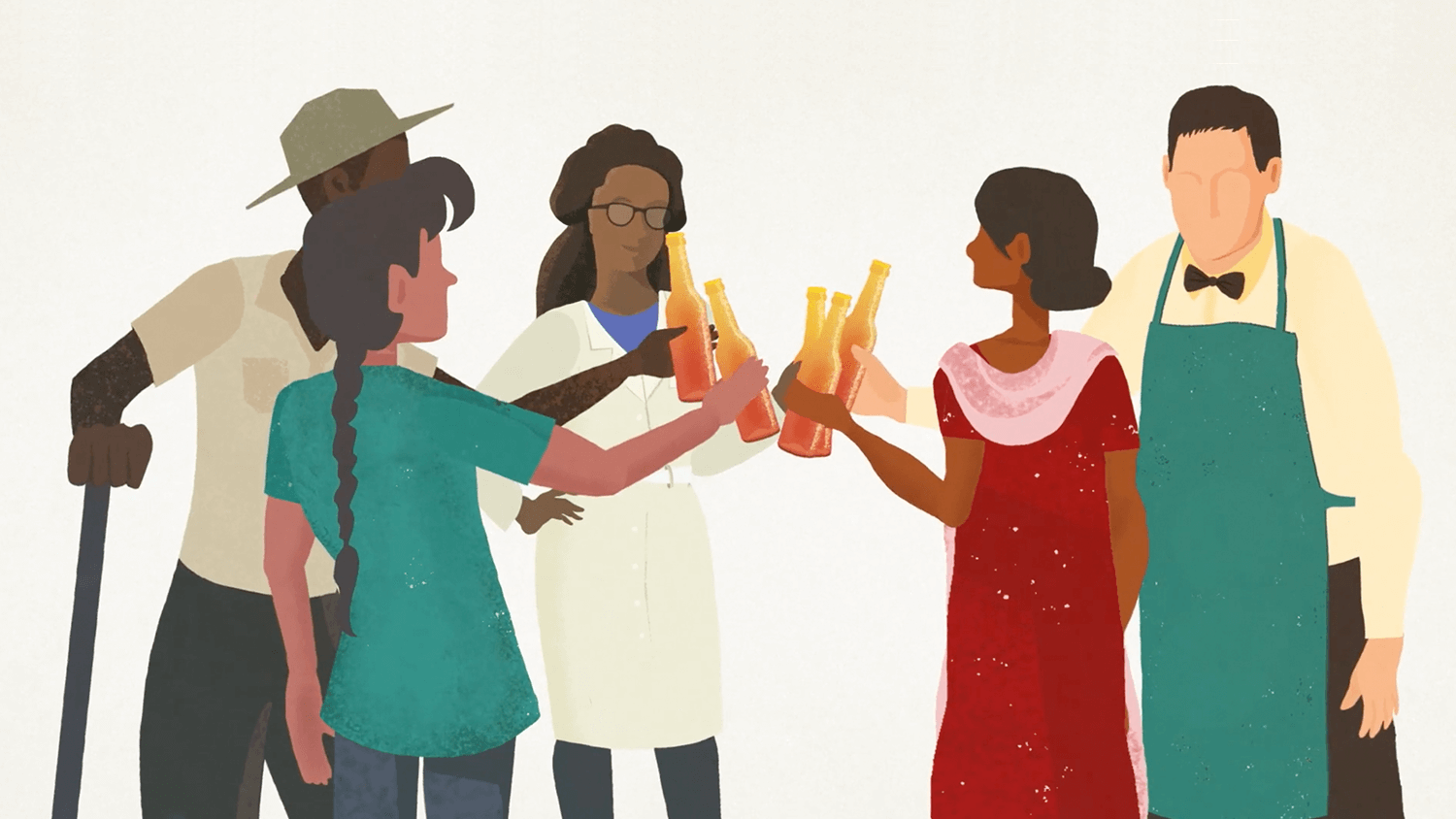 Brand storytelling relies on engaging characters to be effective.

The right characters can imbue a narrative with pathos, humour, and above all, relatability. A dry brand story can be transformed into an emotionally affecting experience when the viewer identifies with the on-screen sprite, or is familiar with the type of individual it depicts. After all, most of us know (or know of) a Brian – your typical 21st Century millennial hipster, and the bearded face of our studio.

A relatable character isn’t necessarily one that looks, speaks and acts in a familiar way, however: even an opera-singing Nile Crocodile can be a relatable character with the right design and animation. In fact, this kind of stylisation is often a very effective character-building strategy because it invites audiences to suspend their disbelief, allowing them to use their imagination to flesh out the narrative world.

So, what is a character?
In order to understand what makes a relatable character, we must first define what a character is. The best way to do this is through the lens of animation: a word which means, quite literally, to bring something to life. In essence, a character is an entity or symbol that is brought to life by animation, writing, or live action. This could encompass anything from a realistic representation of a human being, to a two-dimensional bouncing ball that interacts with the on-screen world. The idea here is to lay out a visual metaphor that also serves as a reference point for the audience.

Characters act according to a set of rules laid out within their world, and are shaped by stimuli within that setting. Our work for World Animal Protection starred a baby Asian elephant captured from the wild, separated from its mother and forced into a life of slavery as a riding animal for tourists.

We see the development of this character from carefree and innocent to hopeless and downtrodden. This is entirely due to the rules of the setting and the actions of the other characters, as our poor little elephant has found out the hard way.

One of the wonderful things about characters is their ability to write themselves. Once the design, context and motivation of a character has been established, it will act according to the rules of its world, much like a real individual. And audiences will identify with that character’s appeal if it serves a real purpose within the narrative.

Why include characters in a brand story?
Characters aren’t always necessary. While they bring development, personality and momentum to the table, they’re just not required in certain types of content, such as highly technical explainer videos. So the question of whether to characterise or not to characterise is this:

Do we want to make our audience feel empathy?

If the answer is yes, then characters are, hands down, the best way to achieve this.

If creating an emotional response isn’t really the objective, as in more complex digital, financial and tech explainer content, characters aren’t essential. Even when people are a necessary part of the message, they don’t have to be defined or fleshed out quite as much.

The video content we produced for the European Space Agency, for example, used vague human silhouettes rather than full-fledged animated beings.

These figures don’t demonstrate agency, action or motivation – they’re simply human shapes intended to contextualise the visuals. Because the purpose of this video is to explain the applications of space technology and satellite networks, adding characters would serve no practical purpose. Characterisation is certainly a budget consideration, but sometimes it can actually detract and distract from the true focus of the video.

Our work for WaterAid, on the other hand, focused on a character-driven narrative that takes the viewer on a journey. The story of a young girl living in poverty and married to a much older man, and her remarkably human spirit in the face of adversity, elevated our message beyond the sum of its parts to deliver a heart-wrenching yet uplifting emotional punch. This is exactly the kind of visceral reaction that any self-respecting NGO wants from its audience.

Saraswati and her best friend, Paras, are heavily stylised, painted with tiny eyes and broad brush strokes. She’s not an abstract stick figure, but also doesn’t look anatomically realistic. The girls are recognisably human, yet painted and animated in an appealingly cartoonish way.

Water Aid | Brides of the Well

They’re enough removed from lifelike that we can focus on telling our story and anchoring it to the setting, without attempting to fully depict complex social issues in the Rajasthani desert. To find out more, refer to our how-to guide on creating content with a sensitive message.

So what makes a character relatable?
That really depends on whether the character in question is created using live action or stylised animation. Live-action characters involve real actors, with all of the facial expressions, movement cues and emotional complexity that come with the world we live in. We use live-action when we want to specifically depict the real world, or create a contrast between different types of animation that visually enforces our message. To use but one example, we deployed a live-action character alongside 3D animation to great effect for InnovateUK.

Innovate UK | Audiences of the Future

But because these characters are realistic in nature, they aren’t always relatable to people of different genders, ethnicities and sexual orientations.

Stylised animation is much more fluid. We prefer this approach as it allows us greater freedom to tell different types of stories, as well as being easier on our wallets. Because animated characters don’t physically resemble the viewer (depending on the level of stylisation) they can stand in for a diverse range of backgrounds and identities. This eliminates the problem of alienating some of our audience by featuring realistic human characters whose lives they simply can’t relate with.

Our Lycamobile Tortoise and Hare don’t belong to any recognisable ethnic or social background. They’re fun, modern incarnations of characters from the classic fable.

Their motivations aren’t complex – essentially, to win. But the narrative of overcoming adversity through perseverance and outside-the-box thinking is a universal theme across every culture on Earth.

With animation, anything can be a character, from our speed-junkie tortoise to a simple directional arrow. And the very fact of its inclusion can breathe humour, empathy and life into an otherwise dull explainer.

How are great characters designed?
Even if a character does not move, act or animate in a meaningful way, stunning design and art direction can still carry the torch, engaging the viewer by populating a stylised and eye-catching world that embodies the brand.

We created a vivacious setting for InnovateUK: Audiences of the Future, with memorable characters that pop out of the screen. Each frame is a tableau taken from human oral history, with scenes that breathe, pulsate and change like the stories we hand down across the generations. The characters, however, are very simply animated.

That’s because they serve the tableau, and don’t require heavy development. And yet, this Witch Doctor has become something of an icon for our studio.

At Nucco, characters are usually described as part of the script, either because they’re called for by the client, or because we believe that their inclusion would best serve the story. We start thinking about character designs early in the process, although we initially keep them very vague and avoid locking down each detail. At the visual development stage, once the script has been signed off, our art directors, illustrators and concept artists are tasked with fleshing out the finer details.

1. Brand Guidelines
The character must be a fit for the brand colours, tone of voice and wider visual language. Because brand-building and world-building go hand-in-hand, it’s important to consider each character within a much wider context: that of the current overall style, and that of potential future content.

2. Client Preferences
We ask all of the tough questions right at the very start of the process to get a sense of the client’s preferences. Sometimes, our client will know exactly what they want, and their personal taste will inform the project. They may even provide animation references.

In such cases, we create a moodboard that collects these references for approval. Some might think this limits creativity, but we say not so! It simply helps us to understand what the client likes and dislikes, after which we can include our personal preferences and caveats.

3. Gut feeling
Sometimes, you have to go with what you feel to be right. That said, it’s not a complete stab in the dark. Our illustrators study the brief, and present three distinct character design variants to the client. We ask them for their pick of choice, although in most cases clients prefer one aspect of one design, and another aspect of another. We then provide a unified concept that incorporates elements of both (or all three.)

If our client doesn’t know exactly what they want, then it’s open season. We suggest options based on what we love, and avoid showing our clients the options we don’t.

4. Mixing and Matching Influences
The creative process can’t really be taught: everyone expresses their vision for a character in a different way. One way to appease that Artist’s Block is to take cues from existing animated characters, and extrapolate something new.

Another of our preferred thought processes, however, involves taking two or more distinct things, and mashing them together. For example, if we wanted to create a character for a cleaning company, we could use the concept of maintenance, and add something unexpected – like an aardvark. And just like that, we’ve invented Mr. Aardvark, the Anteater Janitor!

Even if we are thinking about more realistic characters, there’s still an element of mix-and-match. After all, real people are by far the most confusing mix of influences!

What limitations does every character creator need to be aware of?
The answer is simple: time, budget and groupthink. Time and budget are the bane of character designers and animators everywhere, because they limit what it’s reasonably possible to achieve. If one or the other is lacking, then a character may not come to life as completely as expected, because we’ve hit that technical wall. Groupthink, on the other hand, occurs when the project becomes too collaborative: too many cooks spoil the broth, and too many animators muddy the creative vision. We’ve learned that it’s best to let one (or at most, two) of our supremely talented animators take the creative lead.

Characterisation, when done right, can be the key to content creation success. Here at Nucco, we simply love to conceptualise, visualise, design and animate the characters that fill our rich worlds and stories. And now that we’ve spilled the beans, we’d love to see what you come up with!

Looking to create relatable characters for your brand communications? Get in touch with our experts.

Brand Storytelling
HOW TO USE NEW NARRATIVE TRENDS TO CREATE CONSTANT ENGAGEMENT
Stories have proven to be the most effective communication tool since the beginning of times. This article explores how the latest trends in storytelling can be used to drive engagement.

Internal Comms
WHY VISUAL STORYTELLING DOES CORPORATE COMMUNICATIONS LIKE A PRO
More and more brands are turning to the visual storytelling industry to tell their stories. This article discusses how visual storytelling can help your corporate communications.
More articles
Get in touch.
Let's talk.